A Note From Dean Haven Lin-Kirk

I join the entire USC Gayle Garner Roski School of Art and Design community in mourning the passing of our beloved namesake, Gayle Garner Roski. Gayle was an accomplished artist, patron and supporter of the arts and a dear friend to our school. She will be remembered as a driving force in the USC and Los Angeles art community, and for us, it is her unwavering commitment to arts education. She often attended our student events and graced the halls and studios of the USC Roski School, always with generous smiles and kind words for our students and faculty.

A native Californian, Gayle studied Fine Arts at the University of Southern California where she met Ed Roski and embarked on a life-long love story.  After raising their three beautiful children, Reon Roski, Edward Roski III and Katrina Roski; and at the age of 50, she realized her desire to create art was as strong as ever and began a renewed pursuit of a life as an artist. And she did so with as much passion as everything else she sought—which included summiting Mt. Kilimanjaro, diving in the ocean off New Guinea, running the Los Angeles Marathon, and traveling to the depths of the Atlantic Ocean in a submersible to see the Titanic.

Her drawings and watercolors—which reveal her love of community and interest in world travel—have been exhibited in galleries and museums from Southern California to Scotland. Gayle has illustrated several books including: Mei Ling in China City and Mystery of the Giant Masks of Sanxingdui, both written by Icy Smith; and Earthwaves, a book on ancient Pacific navigation by Michael Smith.

Gayle always looked beyond her own pursuits, and in that spirit, her philanthropic activities supported many non-profits in Southern California. She headed the Community of Angels Sculptural Project, took on leadership roles at the Los Angeles Department of Cultural Affairs, Los Angeles Cathedral and the California Art Club, as well as served in various capacities with The Music Center and the Gene Autry Museum of the American West, among other organizations.

Things came full circle when, in 2006 and under then Dean Ruth Weisberg, Gayle returned to the college where she studied art and met the love of her life. With a historic and visionary gift by Gayle and Ed, the USC School of Fine Arts was renamed the USC Gayle Garner Roski School of Art. The name was subsequently extended to include ‘Design’ in 2015. The gift is believed to be the largest single donation to a visual arts school in the United States at the time. In 2016, the couple made a second donation to name the Gayle and Ed Roski Eye Institute at USC.

Upon hearing of Gayle’s passing, Ruth Weisberg shared with me her thoughts:

“It is with profound sadness that we learned of the passing of Gayle Garner Roski. We are so deeply honored that we will carry her name, the USC Gayle Garner Roski School of Art and Design, in perpetuity. She has been such an inspiration to all of us as a very special friend, patron and fellow artist. She always cared so deeply about our community of students, faculty and staff. I am especially grateful to have shared numerous trips to far-flung destinations in Italy, China and Israel among other places. Her own artwork, sense of adventure and generosity had a transformative effect on her family, friends and everyone she met. We will miss her more than I could ever express.”

My deepest condolences go out to her husband, Ed Roski, their children, grandchildren and those closest to her. We will continue to honor Gayle’s dedication to the arts and arts education as we pass along her passion on to emerging creatives long into the future. We will miss her tremendously. 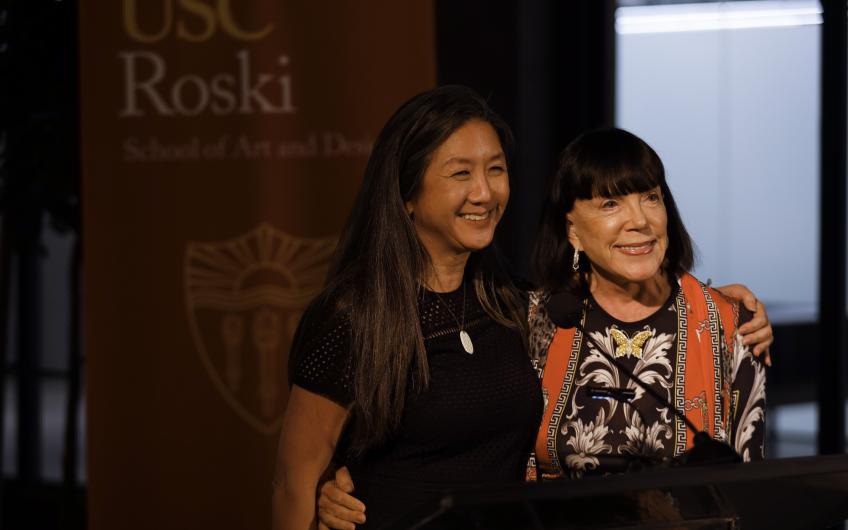