The Depart Foundation held its first solo exhibition of works by Los Angeles-based artist Marc Horowitz on October 8, 2015 to a large crowd of art world curators, collectors, and patrons.

Curated by Nicola Ricciardi, Interior, Day (A Door Opens), is on view October 8 - December 19, 2015. The exhibition features new paintings and sculpture by Horowitz. The show is described as a "prescient instinct for the untapped cultural potential of populist mediums, notably Internet culture, commercial advertising and the entertainment industry, Horowitz looks to establish a social connection and reciprocity between viewer and artist."

Art critic and curator, Nicola Ricciardi, received an M.A. from the Center for Curatorial Studies at Bard College (CCS Bard) in New York in 2014 and he currently lives in Milan, Italy. Ricciardi's writings have been featured in Frieze, The Brooklyn Rail, Mousse Magazine, DIS, Lampoon, and NERO, and he's editor-in-chief at Carnet de miart, the official digital publication of Milan's International Modern and Contemporary Art Fair.

Known for his painting, performance, video, sculpture and social practice, Horowitz holds a master's degree in art from the University of Southern California, and bachelor's degrees in art and marketing from San Francisco Art Institute, and Indiana University Kelley School of Business. It is said, "In a practice that combines traditional drawing, commercial photography, and new media, Horowitz turns American culture on its head to explore the idiosyncrasies of entertainment, class, commerce, failure, success, and personal meaning. Using visual puns, large-scale participatory projects, and viral social pranks, Horowitz creates environments of high energy that lift the most mundane to the status of grand event in complex interplays between subject, viewer, and participant."

The title of the exhibition, Interior, Day (A Door Opens) "conjures a mise en scène, encouraging the viewer to insert themselves into the narratives offered by this irreverent storyteller. The titles of the artworks themselves are drawn from screenplays for The Matrix and Tarkovsky's Solaris, and are intended to reinforce the willfully awkward and wonderfully playful displacements that Horowitz encourages through his works."

The reception after the opening was at the Baxter Hodiak House, home of Pierpaolo Barzan and Valeria Sorci who are the Founders of Depart Foundation. The viewing hours for the exhibition are Wednesday through Saturday 12-5pm at 9105 W. Sunset Blvd., Los Angeles, CA 90069. You can visit their website at departfoundation.com 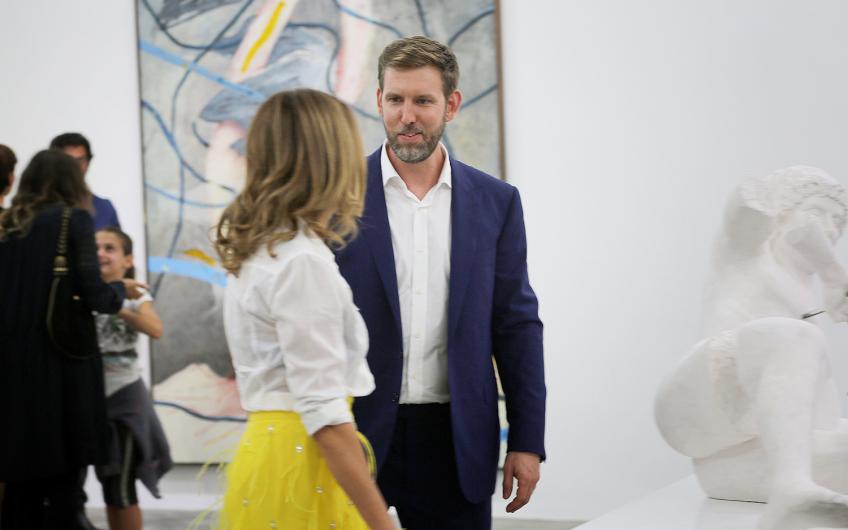