If you ask alumni of the USC Roski School of Art and Design what the design program’s premier strength is, their invariable answer is its interdisciplinary approach. Through their work at 72andSunny, HBO and Newsweek, among many other companies, alumni demonstrate how that interdisciplinary approach has empowered them to become leaders and specialists in their field.

Haven Lin-Kirk, associate professor of fine arts and head of the design program, said USC Roski’s program stands out because it exists within the broader context of a research university rather than as an insular entity.

USC Roski students are often the only designers in their film, business or engineering classes, which pushes them to apply design theory to disparate frameworks.

“A designer that comes from a university is much more invested in the idea that design is part of the larger community,” Lin-Kirk said. “Designers don’t design for other designers — they design for nonvisual people. They bring a different style of communication that has impact.”

The alumni agree. Lisa Hedge ’06, art director and designer at New York creative studio Partners & Spade, said access to classes in other programs and schools is what initially attracted her to USC Roski and helped shape her creative thought process when doing design work.

“Really good designers are conscious of building their knowledge outside of design,” Hedge said. “Design pushes you to be more engaged with the world around you.”

Hedge noted that her undergraduate projects, which spanned photography, typography and sculpture, trained her to holistically approach design. Named as one of the top 20 visual artists of 2012 by Print magazine, Hedge also recently earned the title of Young Gun by Art Director’s Club, a notable honor.

“Lisa is an incredible image-maker,” Lin-Kirk said. “The award is a statement from our guild that she is one of our industry’s top designers.”

Like Hedge, Robert Harkness ’12 sought a “big college experience” when applying to universities. As an associate art director at Playboy Enterprises, he uses his aesthetic and commercial skills to create the visual look of Playboy. Beyond designing layouts, overseeing photo shoots and creating illustrations, Harkness said his work is part of the larger process of rebranding — modernizing the classic magazine while preserving its heritage. His team has won four National Entertainment Journalism Awards, and he personally earned a merit award from the Society of Publication Designers for feature art direction. But for Harkness, the work itself is the ultimate prize.

“The most rewarding part is the creativity of it all,” Harkness said. “An idea never gets old; it’s always changing.”

The exceptional success of the design alumni is also owed to the Trojan Family. Internships with Los Angeles-based companies are often passed down from Trojan to Trojan, and alumni from Chicago to New York hire other alumni with confidence in their shared educational background.

Lin-Kirk said the key to having a successful network is to produce leaders instead of exclusively concentrating on creativity.

As an undergrad, Courtney Kawata ’06 made clear the benefits of leadership when she and Hedge brought a chapter of the American Institute for Graphic Artists to USC. Today that chapter is one of the largest in Southern California.

“We saw the need for a connection, for a network of graphic designers, to establish communication between design students and mentors,” Kawata said. “We wanted to bring the professional world to Roski.”

Kawata, who earned a Webby award for her work as a senior designer at Disney Interactive, is art director at Fox Broadcasting. She spearheads visual design efforts on Fox’s digital platforms, which include Fox.com, social media sites, mobile tablet apps and online advertising. Kawata said that even as a seasoned designer, she never stops learning.

“There’s so much to constantly keep up on, but it’s fun and exciting,” she said. “One of the things I’ve learned is to trust your own design and instincts, and create your own opportunities.

“I never know what the day will hold,” DeHuff said, noting that the skills learned at USC still come in handy. “The ability to provide clear and concise creative direction has been invaluable given that I lead a cross-media team.”

Cristina Pandol ’10 also runs media campaigns across multiple platforms in her role as a creative director at WME, formerly known as William Morris Endeavor and one of the world’s biggest talent agencies. In a position she jokingly describes as “outrageous and miscellaneous,” Pandol handles everything from logo creation and brand development to playing pranks on rival companies.

Pandol’s journey as a designer was a circuitous one. She majored in psychology at USC, but discovered her knack for design while researching her senior thesis.

Ultimately, she minored in business and communications design, saying that the practical experience gained through her design courses gave her the “thick skin” necessary for the infamously demanding entertainment industry. Alongside the challenges of being a professional designer, Pandol said being able to see and touch a portfolio of work makes it all worthwhile.

“There’s something tangible,” she said. “What’s at the end is beautiful or could be moving, inspiring or iconic. It’s a really validating feeling that there’s proof of what I’ve done.” 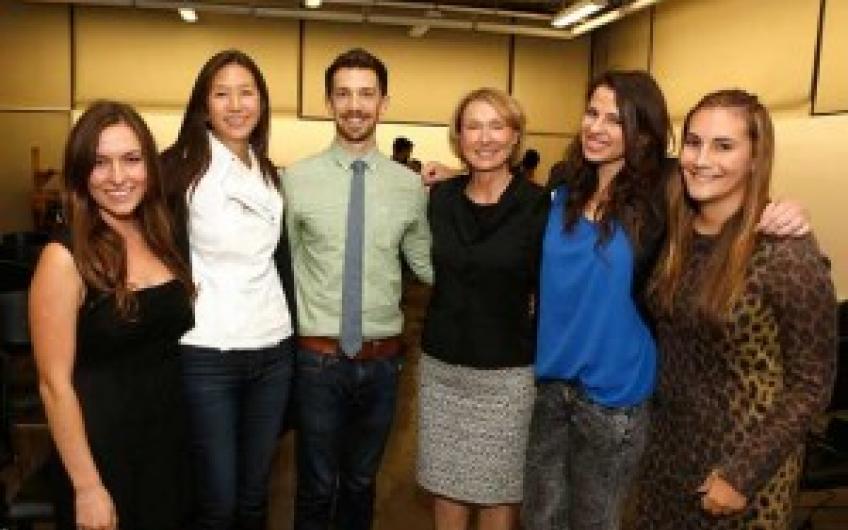