Recent, terrible, acts of violence in the news have jumpstarted a serious dialogue about the role weapons play in our culture. USC student Justin Finuliar has thrown his hat into the conversation with his recently completed art exhibit, “Weaponized,” featured on the first floor of Watt Hall.

The exhibit consisted of five different installations all looking at a different aspects of weaponry and violence. Though it just recently concluded, Finuliar is not done with the exhibit and hopes to display it at the Fisher Museum next to continue examining these themes. He wanted to look at both the positive and the negative aspects of the place weapons hold in our culture.

“What I really wanted to focus on was a snapshot of how Americans feel,” Finuliar said. “The dichotomy of how we want stronger regulation and how we want everybody to be safe in America and on the other side weapons culture is still here, and is very much embedded in American culture as well. I didn’t really want to choose a side because I feel that Americans really haven’t done so cohesively as a nation.”

The installation that first grabs the visitor’s eye upon entering the exhibit is what looks like a weapons rack against the back wall. In “3D Printed Armory” There are weapons of all different sizes and types hanging up against a metal installation. There are machine guns, grenades, nunchucks and tridents. These were all made through the process of 3D printing. Each weapon takes hours to print, but it’s worth it: the replicas, despite their fragility, are very realistic. Finuliar found the designs for the majority of these weapons online and was able to print them without designing them himself. The most engaging aspect of Finuliar’s exhibit is that it is interactive. Every weapon is made with magnetic, easily detachable components. Visitors can take parts from the nunchucks, the grenade and a battle ax and create their own unique weapons. The piece sparks thought about the components of weapons and what makes them dangerous as well as fascinating.

“I wanted the viewer to have a very interactive experience by going up to this wall where everything has been created for the same purpose and then creating their own,” Finuliar said. “Alluding to the madness and absurdity of creating more weapons when you already have so many that accomplish that purpose.”

Another interesting exhibit was “Be a Hero,” a recreation of the Arthurian sword-in-stone myth. A sword was set into a 700-pound block of concrete in the middle of the installation. Guests were invited to attempt to remove the sword as in the Arthurian legend where the one who removed the sword would be the true heir to the throne of Camelot. A live feed was set up so that others could watch the people’s attempts, all unsuccessful, to remove the sword. “It symbolizes to how a specific object, in this case a sword, was designed for a specific purpose. But over time it developed into a symbol for power, royalty, the right to rule,” Finuliar said. “With the interactive aspect, I really wanted to elicit the feeling of wanting to be the person of importance of being the hero and trying to get the sword out. And then on top of that how today’s culture tries to highlight individual achievements through social media.”

The next exhibit is “Falling Arrows,” a series of 120 ceramic arrows all set up on a wall to create the illusion of raining down on a particular spot. The exhibit creates an interesting juxtaposition between these inherently threatening pieces of weaponry and the actual fragility that they exhibit when they are made of something as brittle as ceramic and shaped into thin shapes. Finuliar says that the arrows crack just by being picked up too quickly. The fragility of the arrows, positioned in such a classic, threatening arrangement creates a powerful juxtaposition.

The next work is a three-piece series of ready-mades titled “D.I.Y. 1-3” These are weapons made out of everyday objects. They look absurd upon first glance; for example, “D.I.Y. #3” is a flame-thrower made out of a squirt gun, a lighter and tank of gas.

These make a very interesting point about how certain items are illegal and stigmatized as weapons but are not, in essence, different from everyday items.

This exhibit makes the argument that it is not the weapon that is the cause for violence, but rather, people who have intent to cause violence.

Finally, there is the piece “Every 20 Minutes.” This exhibit is based upon a CDC statistic that three people die from a gunshot in the United States every hour. In one corner of the exhibit hall, a machine drops a bullet onto a pile every 20 minutes. This can be directly observed or heard from a distance recreating the experience that gun violence is experienced very differently in close proximity as opposed to a removed position. It is a meaningful piece to round out the collection.

All in all, “Weaponized” is a very unique exhibit. With only five pieces, Finuliar is able to make some very deep and well thought out observations about gun culture and weapons in general and include the visitors in the dialogue as well. The experience is quite something, especially considering global acts of violence that have happened in the past few years. The response has been overwhelmingly positive. 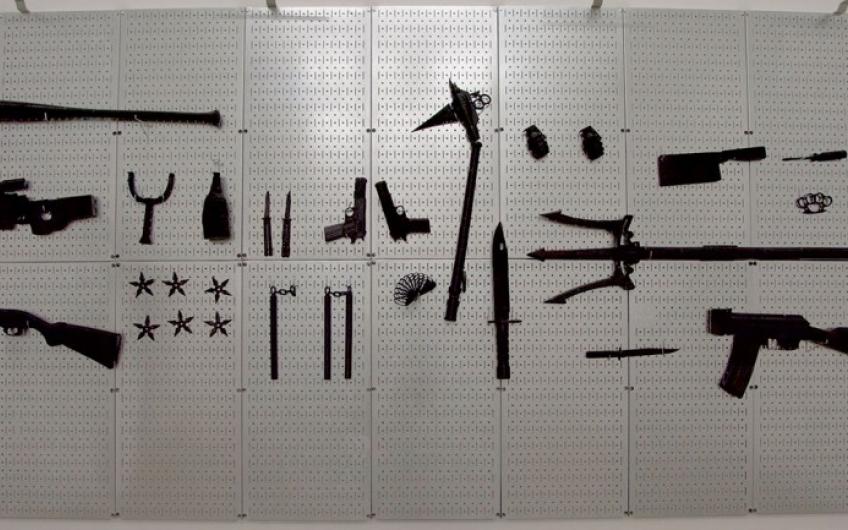